The exhibition called ‘Cycle’ set in motion Neil's idea on the cycle of life. After this exhibition he began thinking his next project and arrived at ‘Ticktock’. He had a pilot installation of ‘Ticktock’ at a harbour in southern Sweden where fishing used to be the mainstay of the local population. Watching people's reactions to the installation and how it touched them made Neil want to take it to the wider world, from the local to the global.

Neil after studying architecture in London founded RABOTAT in 1994 to act as an umbrella organisation, bringing together artists from art, architecture, film, gaming, graphics and music. He set out to re-define existing boundaries and inspire the development of innovative ideas. Recent commissions undertaken by Neil include in fields as varied as art installations, film productions, architecure and virtual & augmented reality.

Neil has been working on socially related projects which are affecting the world today. His recent projects have concentrated on the refugee situation in Europe and has made films for the UNHCR in Africa and Italy. His most recent 360 VR installation called The Crossing premiered in Sweden and will be showing in Denmark and Norway. He expects the installation to tour in other cities of Europe. 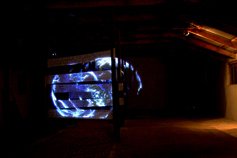